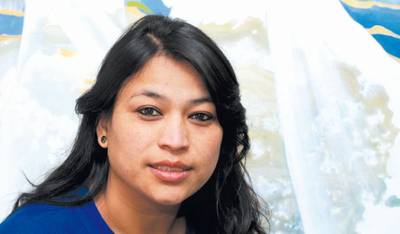 Erina Tamrakar is a visual artist with the Master’s Degree in Fine Arts from Tribhuwan University, Nepal. She has been working as an artist in Nepal since 1989. Her paintings have focused on women and their relationships that convey a strong commentary on society and surrounding. She is the cofounder of Kasthamandap Art Studio and E-Arts Nepal. In addition to her 14 solo exhibitions in Nepal and Korea, her works have been exhibited in many National and International galleries since 1990 including France, Tibet, India, Sri Lanka, South Korea, USA, Belgium, Germany, Netherlands, Japan, Dubai and Bhutan. In 2008, she got the fellowship from Korea National University of Arts in South Korea. She was awarded the third and first prize in National Art Exhibition in 2000 and 2005 respectively and was awarded with Gold Medal in 2008 from Arniko Yuwa Sewa Kosh. She was honoured by “Young Achiever’s Award 2011 by Today’s Youth Asia and awarded Old Wind, Chinichi News Paper Japan. Recently she was awarded from Master Tej Bahadur Chitrakar and Bhadra Kumari Ghale awards in 2013 and 2014 respectively. She has traveled to India, Sri Lanka, Bhutan, Thailand,Tibet, South Korea, France, USA, Singapore and Malaysia