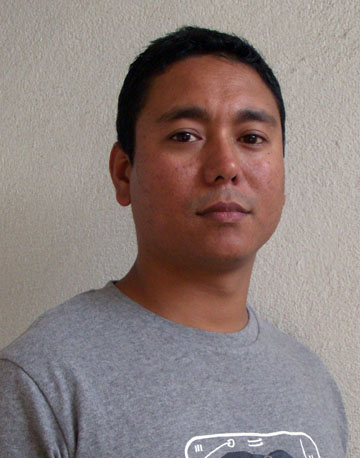 Prithvi Shrestha is a visual artist based in Kathmandu. He has received several awards for his outstanding performance in art. He was awarded from international Comic strip, Bangkok 2001, The World Bank South Asia Region and the World Bank Art Program USA 2012. Prithvi has shown four solo shows. He has participated in several group shows and exhibitions in Nepal as well as in America, Dubai, Bangladesh, India, Germany, Finland and Japan and has participated in artist workshop in Sutra art center 2003 residencies in Britto art trust 2012, and Porapara a space for artists 2008, Bangladesh. He was one of the participants in the 13th and 15th Asian art Biennale at Bangladesh. He has participant in the 17th NIPAF Asia Performance Art Series 2014 Japan.

He is a Founder of Bindu, space for artists. He has conducted various art events. In additional, he is an artist of Kantipur publication weekly national newspaper, Saptahik and the the monthly Magazine Nari.