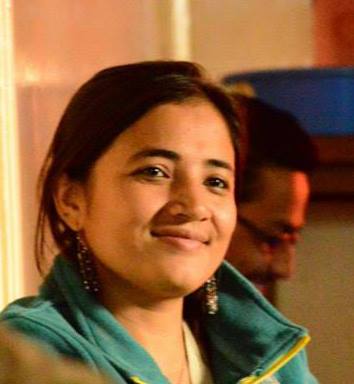 Saurganga Darshandhari is a visual artist and printmaker based in Kathmandu. She holds a Bachelor’s degree in Fine Arts from Tribhuvan University and Master’s degree in printmaking from University of Development Alternative, Dhaka, Bangladesh. She has frequently shown her artworks in Nepal, Bangladesh, India, South Korea and Sri Lanka and has participated in artist residencies in Sri Lanka, Bangladesh, South Korea, Japan, Australia and Finland. She has also taken part in the Kathmandu International art Festival 2012 . She has participated in 13th and 15th Asian art Biennale at Bangladesh. She participated in the 19th Nippon international performance art festival at Tokyo, Nagano, Osaka, in Japan 2013. She is the founder of Bindu, Space for Artists’ and member of Sirjana College of Fine Arts, through which she has conceptualized and coordinated various art events. Amongst various events that she coordinated such as printmaking workshops, performance workshops etc; the latest and significant are the art projects in the earthquake hit areas in Nepal. She through her art organization initiated children art camp and other art projects helping the earthquake victims to recover from the trauma caused by the earthquake that hit Nepal in 2015. Furthermore, her organization Bindu co-organized artists’ residency and exhibition with Siddhartha Art gallery in support of the artists who lost their houses in the earthquake.

She has won several awards and was felicitated with best media award from University of Development Alternative, Dhaka, Bangladesh 2008. Some of the noteworthy felicitations and awards that she received are Basanta Women’s exhibition National Academy of fine Art 2012, National Regional Award Nepal Academy of Fine Art 2014. She was awarded from Australian Himalayan Art Foundation Award 2014. Recently she received Araniko youth award 2016. She teaches printmaking at Tribhuvan University Lalitkala and Sirjana College of fine arts.