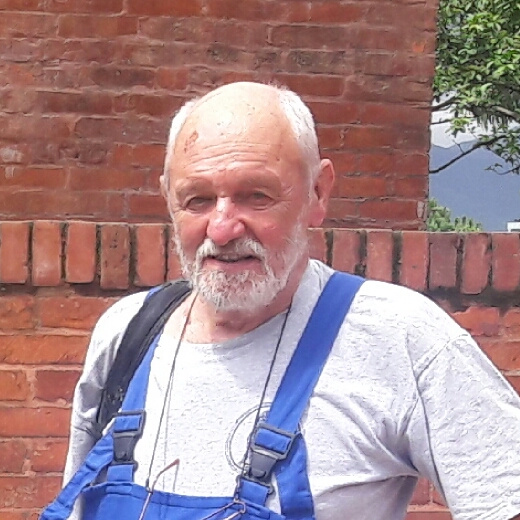 Born 1945 in Prague, Poncar grew up in Litomerice, North Bohemia and studied technical and nuclear physics at the Technical University of Prague 1962-66. He left Czechoslovakia in 1966 to study in Aachen (West Germany), completing his PhD in theoretical physics in 1971. He started his career as a photographer for the German Press Agency in Africa and Arabia in 1972 but accepted an optics professorship at the University of Applied Sciences in Cologne in 1973, from which he retired in 2010. As of 1977 he worked with Wolfgang Kohl on documentaries for German TV in Yemen, Mali, India, Pakistan and Tibet. This took him to Nepal in 1980, the year he produced the two panoramic photographs of Deopatan and Bhaktapur. In 1995 he came to Nepal to join Niels Gutschow for an inventory of Buddhist votive architecture and in 1996 he joined Robert Powell and Roberto Vitali in a bid to document the architectural heritage of Mustang, an undertaking sponsored by the German Research Foundation. Poncar returned to Mustang in 1997 and 1998 (documentation of wall paintings of Thubchen and Champa Lakhang in Lo Manthang for the American Himalayan Foundation) and again in 2010. Poncar’s many documentary surveys of the wall paintings of Alchi, Ladakh (1981-84), Tabo, Spiti (1984), Toling, Guge (Tibet, 1993), Turfan (China, 1993), his long-standing documentation of the ruins of Angkor (1996-2005), his journeys through Burma (2003-07) and his work in Afghanistan (2011-12) are eloquent testimonies to his life-long dedication, with Nepal, India, Tibet and Cambodia at the heart of it.