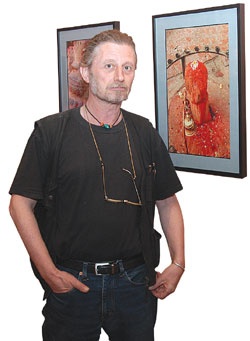 Born in Vienna in 1945, Leonhard Stramitz received a diploma as master restorer in 1975 from the Academy of Applied Arts in Vienna, where he also studied painting and graphics. Stramitz first arrived in Nepal on the 23rdAugust, 1970 and has been back regularly ever since. In Vienna he restored the sarcophagi of Austrian kings and queens in the imperial crypt. In 1988 he was engaged in the conservation and restoration of the collection of the Patan Museum. In 1989 he rendered measured drawings of chaityas, including Bijay Basukala’s 1987/1988 ink drawing of the Swayambhunath Chaitya.

He gilded the iron gate and restored the stained glass in the Garden of Dreams, painted stage sets of the Hotel Vajra and regularly designs and produces contemporary jewellery, preferably in silver. His work has been exhibited worldwide and can be found in major collections.