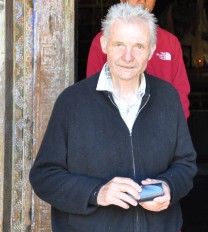 Born in 1942 in Silesia and raised in Geneva, Switzerland and Cologne, Germany, Oppitz studied ethnology and sinology at Bonn University (Germany) and Berkeley (California) before he began his studies in ethnology and sociology at the University of Cologne, where he completed his PhD in 1974. He first came to Nepal in 1965 and published his first book on the history and social order of the Sherpa (Geschichte und Sozialordnung der Sherpa) in 1968.
In the mid-1970s Oppitz returned to Nepal to work in Taka, a village of the Western Magar in the district of Rukum, where he directed the four-hour film Shamans of the Blind Country (Schamanen im Blinden Land) in 1980 (a book with the same title followed in 1981) and a comprehensive account of the Magar society in 1991 (Onkels Tochter, keine sonst. Heiratsbündnis und Denkweise in einer Lokalkultur im Himalaya).
From 1992 to 2008 he was professor at the University of Zurich, Switzerland and director of Zurich’s Ethnographic Museum. His latest exhibition was dedicated to the drums of the shamans in 2007, a comprehensive publication is forthcoming.

Nepal, the Sherpas and Taragaon
A Vignette
I never felt an irresistible urge, which is to say a “calling” in the literal sense, for anthropology or the Himalayas before a path actually opened up to me that brought the two together. It was more a strong aversion – not towards anthropology or the Himalayas! – that drove the two of them into my arms, an aversion towards the feeling of constriction in our towns and the tedium of middle-class norms, which is to say towards the way of life in our familiar culture.
My reluctance to remain imprisoned there my whole life long had already driven me into the wilds in 1961: to the lumberjacks of Vancouver Island, whose company I was allowed to keep the whole summer after my school-leaving exams as a paid temporary worker. But it was clear that I was not built to live by muscle alone, so I went to Berkeley, to beautiful California, and signed up for a course in Sinology and anthropology – on account of the poetry and calligraphy, on the one hand, and the strange worlds and ways of thinking on the other.
At this point I was not thinking of the Himalayas; the only images I had in my mind came from the old newsreels I had seen as an eleven-year-old (1953): flickering black and white footage of Everest’s conquerors Tenzing and Hillary as they proceeded triumphantly across wobbly suspension bridges and through raw, pristine canyons in the east of Nepal. This country entered my sights rather more suddenly when I received an unexpected offer to take part in a programme run by the Association for Comparative Alpine Research and funded by the Thyssen Foundation – as a census taker. The prospect of swapping the musty corridors of the university for direct experiences outdoors eased my decision.
Right at the outset of my statistical forays through Solukhumbu in Summer 1965 I stumbled across a number of manuscripts, historical documents, that enabled a picture to be drawn of the history of the Sherpa clans and their migrations, past and present. This discovery at the age of 22 turned me into an author – into the ethnographer that I have remained.
Early stays in Nepal brought me in contact with the wide variety of people and local forms of religion that distinguish the Himalayas like scarcely another patch of this world. This cultural richness – in every valley another picture, another facet – was also expressed in the great variety in the interplay between landscape and architecture: here the elastic bamboo huts of the Rai, more woven than built, there the tiered, flat-roofed houses piled up the slopes of the Magar villages; here the massive block houses in upper Kali Gandaki, sometimes decorated with red, black and yellow paint stripes, there the hermitages of the Buddhist monks pinned to the cliffs; here the browns of the brick alleyways and pagodas in the Newar towns, there the white cubic buildings amid the fluttering rice terraces. I read about all of this with a thrill – as one proof after another of the genius of the indigenous master builders without name.
But even the various ways of building in the Kathmandu Valley, which in those days still possessed the centuries-old charm that gained it the reputation as one of the pearls of Asia, offered the visitor a stylistic foothold: the almost overgrown labyrinth of the Kulöys’ palace in Ekantakuna; the haunted Rana palace close to Nag Pokhari; the residence of the British Ambassador from colonial times; the Pruschas’ villa in Bansbari; and Ted Worcester’s rural country house in the fields of Tinchuli, north of Bouddha, from whence after a night of serious drinking one scarcely dared to set out on the long foot march to the centre. Since 1971 there is a stopover close to Bouddha especially for this purpose – the Taragaon Hostel, a number of separate buildings made of sal wood and brick, designed according to human proportions and the basic shapes of geometry – circle, triangle, and square. The circular windows of the guest rooms – barrel-like brick tubes – seemed to place as it were the ground plan of the stupa across the way at the vertica– akin to the kind of pictures that are whirled up by the inebriated mind.
With the revitalisation of Taragaon two things collided with one another – the memories of an intense period of research into a country that until that time had still a baffling number of guises, presented at a place that itself had drawn its inspiration from an architecture developed by indigenous builders; and that all-embracing pie in the sky conjured up by the booming road traffic, befogged by carbon monoxide clouds spawned by the progress of civilisation.