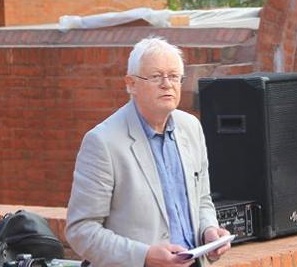 “Why Nepal?
In the summer of 1964 I began my studies at the Architecture Department of The Royal Academy of Fine Arts in Copenhagen. It was the start of five good years in which theory and practice gelled into a unique education. The practical side was a mixture of exercises in architecture and courses in various disciplines. Among these, measuring buildings and town plans was a key ingredient from the first year.
Architectural history and theory was taught by Professor Mogens Krustrup, an expert in Islamic architecture and the work of Le Corbusier. He was also in charge of the grand study tour after the third year, and in our first year already he announced that our tour would take us to northern India. Enthusiasm was high, but after some time the group of students I attached myself to began to consider an extension of that trip.
The sixties saw the beginning of political attention to assistance for underdeveloped countries, as they were then called, and since we had the rather naive idea that everything in the West had already been built, we felt that our future might very well be in these areas. We wanted to use our education for that purpose and measuring and recording seemed to be valuable training, the Indian subcontinent an interesting subject.
A new tutor returning from the U.S. via Asia showed slides from his trip, and when he heard about our plans he pointed out that Nepal would be a good choice, since no such physical surveys had been done there and it was high time for such a project because the fine Nepalese architecture was in a serious state of decline.
Curator Werner Jacobsen from the Danish National Museum became our mentor. He had spent several years in Nepal in the 50s studying Nepalese culture, and his knowledge about Nepal was of inestimable value for us.
Our journey (in a car!) started in October 1967 and took us from Denmark through Europe, Turkey, Iran, Pakistan and Northern India until we finally reached the foothills of the Himalayas in December. We soon realized that we had made the right choice.
Arriving in Kathmandu was like coming to an overgrown village situated in a world of beauty. Our plan was to find an isolated village in the mountains, but we soon realized that this was not practicable.
From Vienna we had brought an introduction to the architect Carl Pruscha, and he persuaded us to consider the Newar settlements in the valley instead. He even offered us his cooperation, since he could see some perspectives in relation to his own work on the planning for Kathmandu Valley.
Our choice fell on Bungamati, a few hours’ walk south of Patan. The fact that this village was the home of the Red Matsyendranat( Rato Machhendranath) was a coincidence, but it later turned out to be advantageous because of the interest for our project. We were not too familiar with the complex religious universe of Nepal (little has changed on that score), and it was the more materialistic side of Newar society that preoccupied us. But we soon realized how profoundly interdependent these matters are.
Our studies consisted of extensive surveys of the village plan with its narrow streets and lanes around the large temple square. We surveyed the different types of family houses and courtyards, and we compiled a photographic portrait of the daily life of a typical Newar family. Furthermore, we organized a socio-economic survey by interviewing people about their living conditions (income, landholdings, caste, etc). We were surprised to see how this society functioned in isolation as an almost self-sufficient community, but with a sophisticated social structure.
Back in Denmark we had to complete our studies at the Academy, but we managed to organize a very successful exhibition at the National Museum in Copenhagen, which was later shown at the Musée de l’Homme in Paris. Articles appeared in journals and a small book was published in 1974.
After finishing my studies, I returned to Kathmandu in 1971 and came to work with Carl Pruscha at the CEDA building in Kirtipur and on the tourist village in Taragaon. Several later visits to Nepal have renewed personal relations in Bungamati and gained me new friends. I am sure that we all have the feeling that that trip in 1967 changed our lives. For me, it has been a lifelong love-affair with Nepal and its people.”
Århus, June 2010