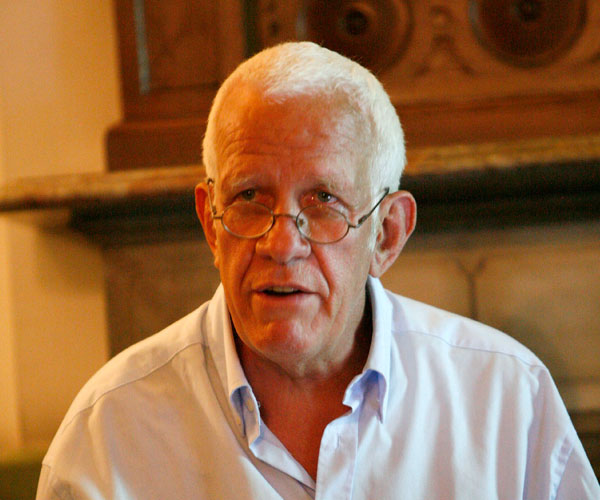 Born in Hamburg in 1941 as the son of an architect, I attended Buddhist Sunday classes as of 1958 and when I finished school, which included learning Latin and Greek, I had made up my mind to join a Buddhist monastery in Burma. Inspired by a report (Nepal. Ein Sommer am Rande der Welt, 1956) by two mountaineers, Heinz Steinmetz und Jürgen Wellenkamp, who climbed Annapurna IV in May 1955, I was determined to pass through Nepal on my overland route.

I boarded a train on 13th March 1962 and crossed the border into Nepal in Birgunj on 9th July. The highway that had established the first road connection with “the world” in 1956 was blocked by a landslide, but a small airplane brought me from Simra to Kathmandu the following day. My diary says: “I feel at home in this landscape”. In it I mention the many temples, the hybrid animals and lions protecting everything and conclude that “this is the country I have always dreamt of”, not at all foreign or strange, but “earthy, romantic, playful and merry”. This romantic feeling I tied to the feeling conveyed by the Austrian expressionist poet Georg Trakl (1887-1914) and his verses about summer or autumn. In September 1970 I returned and when I witnessed the rice harvest in October I wrote in my diary “everybody extremely busy in a country of old, serene and cheerful”. My journey was sponsored by the German Research Council as I intended to study villages such as Marpha and Tukche in lower Mustang. And as it happened, I met the first secretary of the German embassy, Heinrich Seemann, who drew my attention to the Pujarimath in Bhaktapur, the restoration of which was funded by a grant from the Federal Republic of Germany on the occasion of the marriage of Crown Prince Birendra Bir Bikram Shah Dev to Aishwarya Rajya Laxmi Devi Rana on 27th February 1970. I spent a few days in the badly ruined building complex and with the help of Krishna Shrestha, the director of the National Art Gallery, prepared a plan for its restoration safe in the certainty that the German foreign ministry had invited us, a group of young architects (beside myself Gerhard Auer, Hans Busch, Wilfried Kröger), to carry out the first ambitious bilateral project for the conservation of the architectural heritage of Nepal. I returned on 22nd August 1971 to organise the site and two weeks later ten people took residence at Bhaktapur itself, four architects with their wives and children.

In the initial stage, Wolfgang Korn joined the team. He had been working with Carl Pruscha at the Town Planning Office since 1968 and had prepared measured drawings of the Math, the first measured drawings of a Newar building. With night shifts and a large workforce, the project was completed within only eight months.

Having the chance to live in Bhaktapur at a time when there were only two or three buses plying a shuttle service between Kathmandu and Bhaktapur for the few commuters, was a genuine godsend. Witnessing Indrajatra and Dashain opened up a new world in which urban rituals were more than simply a custom that had survived. It was a necessity for the entire society, an urge to contribute to ritual renewal. This experience changed my life fundamentally. Obviously, Bhaktapur is more than bricks and roads, a transcendental space graced the Navadurga, who appear as a living, tangible troupe of deities. This was probably a romantic impulse responding to a longing for an urban life that offered more than the fullfillment of functional requirements. That was maybe only possible in a world very different from my own cultural background. The fascination, however, turned into an affection so powerful as to bind a substantial part of my life to Bhaktapur.

I came back to Bhaktapur with my father in April 1973 to witness Bisketjatra for the first time and in 1974 I returned with a scholarship from the German Research Foundation. The fieldwork for years to come was devoted to the rich urban rituals, not only of Bhaktapur. From 1980 to 1988 andfrom 1990 to 1995, architectural surveys were devoted to places such as Gorkha and Nuwakot, Kag and Khyinga (in Mustang) or typologies such as 19th century temples of Patan, Kathmandu and Deopatan and Buddhist votive architecture –stupas, which are known in Nepal as caityas or cibhahs. The challenge was to inspect everything in greater detail in order to slowly develop a chronology based on stylistic evidence. This strategy was supported by the first radiocarbon dating initiated by Mary Slusser in 2005 to which I contributed more samples in 2007. Tracing architectural fragments back to the 9th century was certainly a revelation, but I was not in search of the oldest extant fragments. Then as now, my interest was to establish a typology of details enabling me to identify changes to one and the same structural or iconographical detail over a period of 1,500 years. The unbelievable richness in the carvings of lotus leaves, flowers and buds on a single building enlarged my architect’s mind hitherto restricted in its standards to the narrow framework of modernity. The appreciation of narrative details has profoundly changed my mindset. I feel I have learned especially from Newar carpenters.

The learning process was appreciably heightened during the reconstruction of the Eight-Cornered Pavilion (Cyasilin Mandap) on Bhaktapur’s Darbar Square in collaboration with Götz Hagmüller and Surendra Joshi from 1987 to 1990. These years of work with 25 carpenters were an absolutely joyful experience. It so happened so that our youngest daughter Josefin attended the Lincoln School in Kathmandu as of 1989. At that time, my wife Wau and I found a wonderful house on the outskirts of Bhaktapur to which we return every year on the occasion of Janaipurnima. We just don’t want to miss the feeding of the frogs (byakuta nakegu) and Gaijatra on the following day.

Ritual has never relinquished its hold on me. In collaboration with Axel Michaels, I started in 2001 to document life-cycle rituals of the Newars, with a definite focus on Bhaktapur – my other home. Three volumes on death rituals (Handling Death, 2005), initiation rituals (Growing Up, 2008) and marriage rituals (Getting Married, 2012) provide an overview of rituals exposed to ongoing change.

In November 2011 I had fulfilled my personal desire and obligation to collate the existing knowledge of Newar architecture. Building upon an extensive archive of scale measured drawing I established, in a six-year long effort, a typology of architecture, while Bijay Basukala constantly went to the field to fill gaps. Bijay was and still is working with me since 25 years. Without his mastership and experience I would have reached nowhere. I also have to mention Bishnu Prasad Shrestha as my spiritual (and also political) guide since 1974. Without his intellectual clouts I would never have understood the intricacies of Newar milieus and social environment.