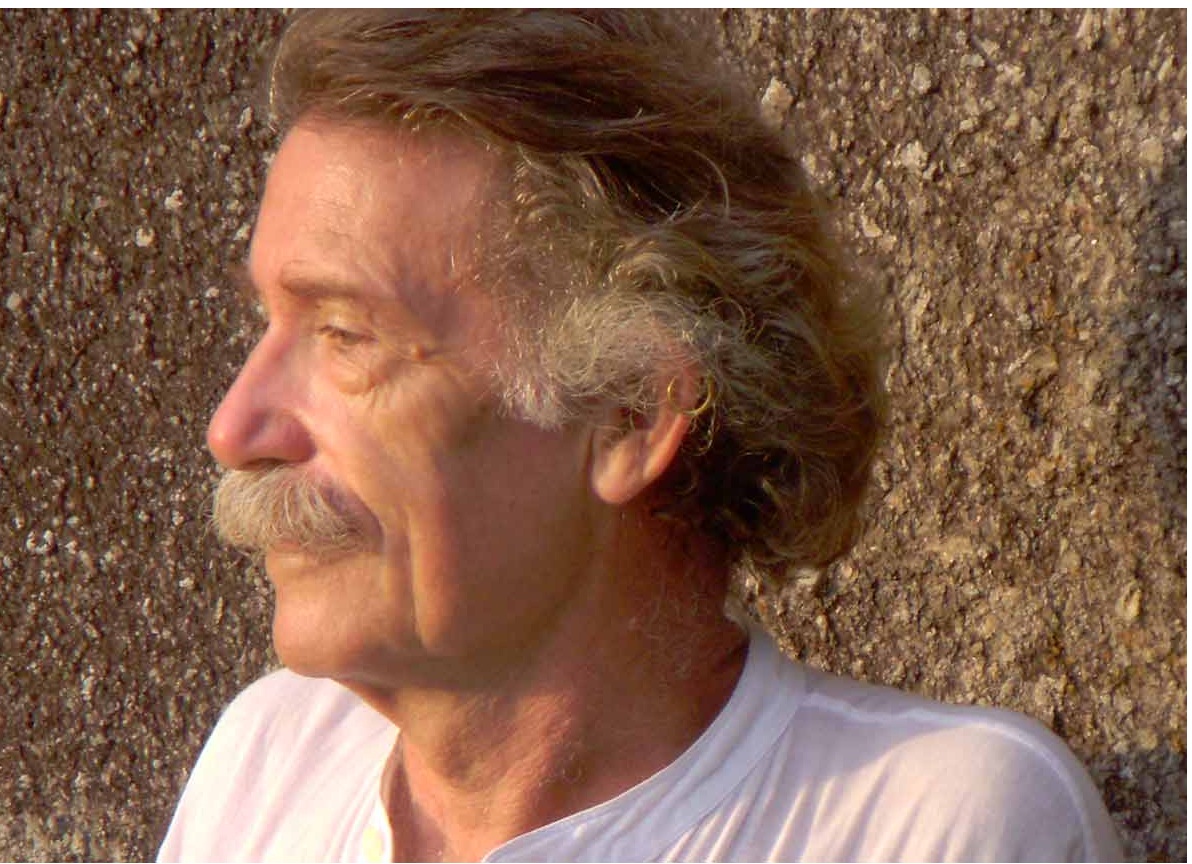 Born 1948 in Sydney, Australia, Robert Powell studied English literature, Psychology and Architecture at the University of New South Wales from 1965 to 1972. From 1975 to 1979 he joined architectural practices in London and completed design work for projects throughout the Middle East, including a garden for Prince Khaled of Saudi Arabia.

In 1975 Powell began visiting Ladakh (India), and went on drawing houses, stupas and landscapes until 1980. In 1979 and 1980 he also worked in the villages of Kalash and Swat (Pakistan) documenting mosques and wood carvings.

In June 1980 Powell rented a house in Chauni near Swayambhu enabling him to work on his sketches from Kalash and Swat on larger sheets and in greater detail.

In anticipation of the exhibition in Zurich in 2001, Peter Herbstreuth asked him: “What made you stay?” – “Nepal is a quiet place.” Powell replied. “It is slightly weird to live in Swat. People carry guns and you hardly see a woman. So I came here to stay for three months to finish the drawings. After that I thought I should do drawings from here. The Bhaktapur Development Project was going on. I went out there with the Swat drawings and asked to see the director (GötzHagmüller). Ludmilla (Hagmüller) was his assistant. She said no, no, he is terribly busy, but I showed her the drawings and she invited me to their house for lunch. Then Götz commissioned me to do some drawings in Bhaktapur. They were leaving the next day for Vienna and they said, just stay in the house in Bhaktapur and do some drawings there. So it basically started like that, what made me stay there. When I completed the work, I had a small exhibition of twelve paintings at Sabine (Lehmann’s) Vajra Hotel” (Peter Herbstreuth, pp. 15-16).

In February 1981, Powell started his work in Nepal with the Kuthu Math courtyard facade, which ever since has been something like a trade mark for his work: “On the scale of 1:25 carved detail could not be adequately represented. Instead, the achievement of a contrast between surface and shadow to indicate the depth of carving was crucial. The layers of projecting elements, of battens flush with the brick surface and lintel, jambs and sill set behind that surface are what produce the rich ‘face’ of Newar architecture in which windows quite literally function as eyes. Functional paradigms like light and ventilation seem to have been secondary aspects that did not guide the architectural design. Bob decided to open five of the eleven doors and windows that had leaves or shutters. It is the contrast between closed and open ‘holes’ that enriches the entire composition. The blackness of the openings focuses the composition and at the same time draws the attention to the latticework of the closed elements. The black holes lead into an undefined nothingness that disturbs the strict axial architectural order of the facade. The bell on the ground floor adds to an imbalance to that order. It indicates sound and ritual use – the ritual chamber housing Shiva’s linga is located on the left” (Niels Gutschow, p. 32).

Robert Powell continued his work in Bhaktapur through 1981, later turning his attention to Sankhu and Kathmandu (1982), Gokarna, Pashupatinath and Panauti (1984). From 1981 to 1999 he worked at the paper-making factory run by UNICEF in Bhaktapur designing products. He also worked as an architect, designing the Machan Wildlife Resort in 1986 and the Pokhara Eye Hospital in 1987. In 1992 Powell was commissioned by Niels Gutschow and GötzHagmüller to produce elevation drawings (based on exact measured drawings) of Buddhist votive architecture (skt. stupa, Nep. chaitya) for the Patan Conservation Development Programme sponsored by German Technical Cooperation (GTZ).

In April 1992, and again in 1994, Powell was part of a multi-disciplinary research project, funded by the German Research Foundation, documenting the architectural heritage of Mustang in collaboration with Niels Gutschow, Jaroslav Poncar and Charles Ramble. Until 2000 he worked on a number of Mustang scenes, an experience that encouraged him to make drawings of imaginary architecture.

Robert Powell’s Mustang paintings were exhibited in 1999 at the Arthur Sackler Gallery, Smithsonian Institution, Washington (‘Behind the Himalayas, Paintings of Mustang’) and at the Shirley Day Gallery, London (‘Earth Door Sky Door’) in 2000. A comprehensiveexhibition was shown at the Völkerkundemuseum der Universität Zürich in 2001: “Zeichnungen aus dem Himalaya von Robert Powell. Himalayan Drawings.”