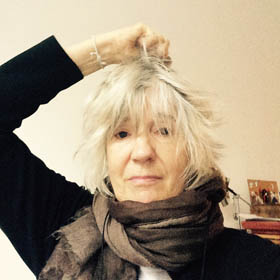 Born in 1938 in Berlin, the German photographer is known for her conceptual series of mostly black and white photographs. She lives and works in Düsseldorf. Schulz-Dornburg often explores architectural settings and specific details of such settings. Starting with the “Curtains of San Marco Square” in Venice in 1973, she moved on to the Palace Pier in Brighton in 1976, to Pagan in Myanmar in 1975, to the Tigris in Irak in 1980 and to Sulawesi in 1988 before she came to Nepal in March 1993. Invited by the German Cultural Institute (Goethe Institute), she initiated an ecological project drawing attention to the Water Culture of the Kathmandu Valley and the living heritage along the Bagmati River. Six photographers and members of the Nepal Photographic Society (D. Basnet, S. Karki, K.B. Limbu, R.K. Manandhar, Pushpa J.K. Shrestha, B. Shrestha) captured various aspects of the riverscape. The brochure “Bāgmatī” published in 1995 by the Hamburg Environmental Institute contains 24 of her photographs. Schulz-Dornburg is an indefatigable explorer. She has published photographs of the hermitages along the pilgrimage route to Santiago Compostela, monasteries in Laos (1996), caves in Georgia (1997), bus stations (“transit sites”) in Armenia (1999), the railway station in Hedjaz 2003. Her photographs can be found in major collections. Her work has featured in exhibitions since 1975, comprehensive overviews were to be seen 2002 at the Valencia Institute of Modern Art (IVAM), Spain and 2011 at Bochum (“Niemandslicht”), Germany, 2011-12 at the Pergamon Museum, Berlin (“From Medina to the Iranian Border”) and 2012 at the Centre for Contemporary Art, Beijing.