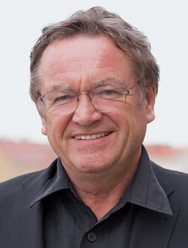 He first came to Nepal in 1970, where he met Carl Pruscha and Niels Gutschow. He returned in March 1988 and in late November/early December 1991 with eleven art students to explore urban sites in Bhaktapur and Patan.

His ballpen drawing of Patan Darbar Square depicts the Keshav Narayan Chowk and the Degutale Temple.